Torrey Hall At UVM Gets A Long-Overdue Face Lift

Torrey Hall At UVM Gets A Long-Overdue Face Lift

For Bruno Gubetta and his crew at Alpine Restoration, the sudden fire that gutted UVM’s Torrey Hall on August 3, 2017, was just one of many obstacles to overcome in restoring the historic brick building, which sits next to the President’s house in the center of the Burlington campus. 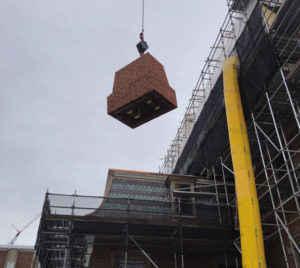 This photo shows the cap of one of four rebuilt chimneys at Torrey Hall on the campus of UVM being hoisted into position after being rebuilt in the parking lot.

“We’d actually done most of our work when the fire broke out,” says Gubetta, whose company has worked on historic projects around the state for more than 20 years.

“The building has a mansard roof with four different chimneys, and they definitely were all different. That is, they were all a different size. We had to measure each chimney, count the number of ‘courses’, or number of bricks, both horizontally and vertically, before we took them apart, cleaned them and put them back together. In those days (the masons) just sort of winged it. These chimneys were really more ‘show than go’. That is, they weren’t really used a heat source, but were more ceremonial. They were more like skinny vents.

“So we had to match them from the base right on up. Every one of them was unique, which helps make the building unique. But it was a pain in the neck, actually.

“And the quality control on the brick was pretty weak back in those days also, so we had to replace some of the bricks and match the new ones to the original.” 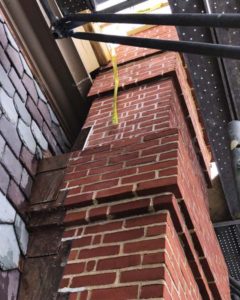 They were also charged with intricately repointing a ‘bump out’ on the west side of the building, facing Lake Champlain.

“(The bump out) contains white mortar that looks like hieroglyphics on the top and bottom,” said Gubetta. “We think a UVM art student designed it when the building was built in 1863. So we needed to match that.”

In addition to the challenging historic details, the project faced several other major obstacles—even before the fire.

Due to the extremely rainy weather in the spring of 2017, when the project was undertaken, it was not possible to the work “up in the air” on boom lifts, so each of the quirky chimney units were disassembled and reassembled totally in the building’s adjacent parking lot, underneath tarps.

“We had the chimneys about two thirds finished when the fire broke out,” says Gubetta. “So the project changed from being a partial restoration to a total gut and rebuild. But we were still able to finish our part on time, by September 1.”

Augmenting the challenge, to say the least, was the fire that broke out near the building’s roof due to a construction accident on the afternoon of Thursday, August 3.

“It was really no one’s fault,” says Gubetta of the blaze. “Everybody was following all the recommended procedures. It was just an accident.” 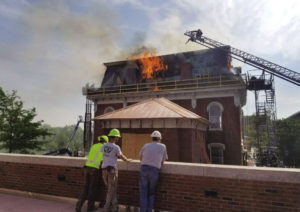 Looking east, three employees of Alpine Restoration watch from a deck at next-door Billings Hall as fire breaks through the roof of Torrey Hall on Aug. 3, 2017, during the building’s restoration.

The fire department was quickly on the scene of the four-alarm blaze, and extinguished it before it could do significant damage to the building’s collection of rare plants and animals in the Pringle Herbarium, named after Cyrus Guernsey Pringle, who collected and classified many of the rare specimens housed there. The fire was the second of a pair of major catastrophes to strike the structure during 2017. On May 3, 2017, a rare black rhinoceros horn, acquired by the college around 1900 and displayed on a first-floor wall, was stolen by an intruder who disabled a door lock. The horn, estimated to be worth up to a half million dollars, was recovered by the Burlington Police Department in March.

Despite all that, Torrey Hall, named after Rev. Joseph Torrey, who ran the college from 1862-1866, is now restored and open to the public to view its historic treasures.

Restorations like these are difficult, says Gubetta, but worth the effort.

“It’s always a major endeavor to bring them up to modern standards,” he says. “It just comes down to getting the money for the restoration process. As time goes on, buildings like this are more and more rare, and valuable.”